The flaws in Elden ring

Finally the latest installment of the Souls franchise came out, reviewers everywhere are calling it 10/10 with some of them going as far as calling it best game of all time. This article is spoiler free, but the screenshots do show some late game areas (no bosses). At the moment of writing, I have 92 hours in the game, I play on PC, linux, I started on launch day on 1.01 (the day1 patch), and finished on 1.03.2.

I'm going to take a little detour, and start by saying, that Wine, Proton, and DXVK, are amazing. Gaming on linux has never been better, in so many different aspects, it's unbelievable. The whole game is playable, from start to finish, with online (the game uses EasyAnticheat, and it works fine). If you are playing on Steam, there is nothing to configure, or set up, thanks to proton, everything truly works, with the single click of the play button.

I'm sure everyone who is interested in this game has read some of the reviews, which are all raving about it. Elden ring is a phenomenal game, there is a huge amount of content in it, and a joy to play. I agree that it definitely deserves some awards, but I don't see many sites talking about some of the glaring problems this game has, so I'm going to talk about that, I don't think it needs any more praise.

The game is locked into a 60 fps framerate on all platforms, which is completely unacceptable in itself for 2022, but the game can't even keep that stable. It often dips down to 40 in large open areas, even with my somewhat beefy computer. I managed to get a 3070 before the prices exploded even higher, and even with this, it cannot hit a stable 60 fps. Things have gotten much better, but around launch day, a lot of folks with older GPUs are complaining about invisible enemies, and stuttering all over the game.

Controls on PC are an atrocity

I don't know any single other game that is this bad, and I also don't understand why this game gets a free pass at this.

It is seriously like none of the developers have ever played a PC game. There is absolutely nothing in this game that makes it incompatible with mouse and keyboard, apart from From Software's laziness to put some effort into this. We have solved controls for TPS games 20 years ago, even games that have actual ranged combat. How is this acceptable for a PC game is beyond me.

The game is still full of jank, terrible UI/UX antipatterns:

They even added some new ones, I kid you not:

There are some really funny videos circulating on Youtube, that are shitting on Ubisoft about what the game would look like if it was made by them, and there is definitely a lot of truth behind it, but holy fuck the irony is thick, because games that came out in 2000 had better UI/UX than this game. 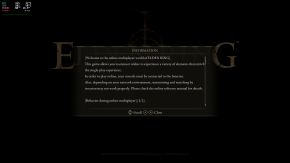 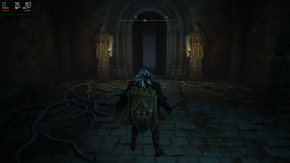 You are going to see this so many times 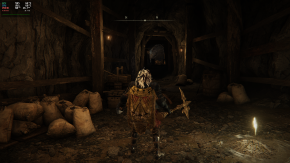 And this one as well 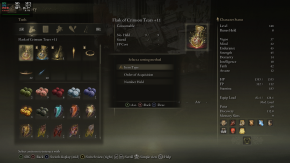 Scaling, balance, and requirements on equipment

The game has an extremely inconsistent scaling, in both what the requiments are for using a piece of equipment, and mostly for spells, how much damage they do. The second main boss drops a spell, that requires 70 intelligence to use. You are not even going to have 30 at this point in the game. That is a massive requirement already in a single stat. This happens around the 20-30 hour mark, and unless you specifically gear your character for this spell, you will not be able to use it until another 20-30 hours in, AND the spell is junk, it has long cast time, and has worse FP/damage ratio than Glintstone pebble (your starting spell).

On the other end of this scale, you have rotten breath, an incantation that requires 15 faith, and 12 arcane, can be acquired as early as a couple hours in, has low enough requirements that you can almost immediately use it, and it carries you along the whole game. Not only it outdamages 95% of the other incantations, even late game ones, it also applies scarlet rot (this game's version of toxic, basically a heavy dot), which most enemies, even bosses are not resistant against.

The same thing happens with sorceries. In the very beginning of the game, almost right out of the gate, you can pick up a staff, that needs 18 int, and has S scaling in int. It even buffs gravity sorceries. Do you know what you can find right next to this staff? A gravity spell that also requires 18 int, and it will carry you the whole game. The staff is better than other, 40 int staves, that you find 30 hours in, and the spell is better that most late game spells.

By the end of the game, I had a selection of 25 incantations that I could use, but I basically ended up using only 3:

Everything else was lackluster, compared to these, either because they were extremely slow to cast, and by the time they come out you get interrupted, or their range was so short that you almost need to be in melee range, at which point you can just bonk the mobs in the face, or they weren't doing enough damage compared to how much FP they cost.

The same scaling issues are present with spirit ashes as well. There are about 3 that are worth using (out of about 50), and one of them that you get around midgame, is so strong that it trivializes all of the bosses of the game, except for one single optional boss.

The game has a lot of dungeons, but so much of it is just uninspired copypaste. There are a few "legacy dungeons" that are comparable to areas of previous games, but nothing as memorable as Irythil, Anor Londo, Iron Keep, or Ringed city. The non-legacy dungeons are all the same, and they often feature the same enemies as well. I can't tell you how many dungeons have the same stone gremlins, the skeletons, or the tree like creatures. These dungeons are so dull looking, that some roguelites can autogenerate more exciting looking rooms.

Most of the loot you find is useless

Which makes the game feel quite unrewarding around half way. The loot you get from dungeons are either:

The lack of upgrade materials is the worst. In this game, you have regular weapons, that can go up to +25, and use smithing stones, and you have unique weapons, that go up to +10, and use somber smithing stones to upgrade (there are also some weapons that cannot be upgraded at all, I only found one, not sure what's up with that). To upgrade a weapon to +3, you need 12 smithing stone [1]s, to go to +6, you need 12 smithing stone [2]s, and so on. There is a major problem with this: any weapon you find, even if you have the requirements to wield it, will be useless, until you can upgrade it to the current area of the game you are on, otherwise, it's not going to do enough damage, however, the game doesn't give you enough stones. By the end of the game, you will have enough stones to fully upgrade maybe 3 unique, and 3 regular weapons, but that's in the course of the entire game, not when you actually find a weapon you want to try out.

There is a way to buy the stones from a vendor, after turning in specific key items, so that you don't have to farm random drops from mobs, but that is gated either behind bosses, or are in areas that you need to progress the game for, and the stones you can buy are always a couple of tiers below, than what you would need for the current area where you found the key item. This effectively locks you into 1 or 2 weapons, because if you uprade more than that, you risk being underpowered.

There is a crafting system in the game, and I'm happy that From dared to experiment a bit with this, but the crafting system is useless. The items you can craft are gated behind recipes, need ingredients that you have to farm, and need components that are gated behind dungeons, and even after all this, they fail to make any impact after you craft them. I opened the crafting menu about 4 times in my whole playthrough.

Many monsters and bosses are reused through the game. I'm not even talking about recolors, or reskins of the same models, they are straight up the same. Skeletons, dogs, gremlins, octopus tentacle thing, rats, jellyfish, the exact same monsters reappear at various parts of the game, with the exact same moves, only difference is that they have more HP, and hit harder. The same rats and dogs that were ok in the early game, will mop the floor with you in the late game. It's even worse, and more apparent with the bosses, I think I killed 6 of the same Erdtree avatar, 6 Tree spirits, and 5 Dark knights. Even if there is a variation on the bosses, it's astonishingly lazy:

EasyAnticheat or not, guess what Elden ring has? Hackers. There are videos of people who can instakill you with hacked spells, or can get you banned from online play, because they can put modified items in your inventory, that the game recognizes as you cheating. Any game that gets sufficiently popular will invite hackers, but there is a major difference between wallhacks, and people using non-existent spells, or putting (non-existent) items in another player's inventory. This is hinting at missing server side checks, which is just amateur hour, and completely moronic that it will get you banned.

This is quite concerning, because the dark souls servers have been shut down on January 23rd, after a streamer showed proof that there is a RCE (remote code execution) vulnerability in Dark souls 3, which basically means that anyone that invaded you, could have taken over your PC, ranging from spreading malware, to cryptolockers. Apparently From was contacted about this months before the streamer demonstrated the hack, there was even community released tools to protect you from hackers, and From Software didn't give a shit, until months later they shut down the servers (but pinky promised it's coming back, which has not happened as of writing this). I'm very happy that I'm playing on linux, because wine sandboxes the game to some extent, so even if someone drops some kind of malware, it can't do that much damage. 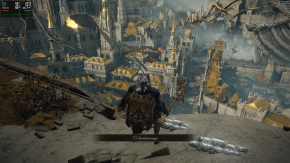 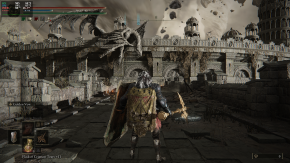 With all this said, it's still a great game, and I can recommend it to even newcomers as well, because it might be the most accessible of any of the souls games, but I wish people weren't so blinded to see the obvious flaws, because it's definitely not a best game of all time.