This game was completely off my radar, I've heard they are making a sequel, but I imagined it's not coming out anytime soon. I have never played the original game from 2005, the only thing I know is that it was a pretty huge success, and I've seen a lot of worry that people were very afraid that studio is not going to be able to make a proper followup that can live up to it. A lot of people were caught by surprise when the game actually got glowing reviews.

The game came out on multiple platforms, I'm personally playing on PC with a controller. There is apparently going to be native ports for linux and macOS as well.

I'm just going to say it straight away, this game delivers. The first and immediately obvious thing I think everyone is going to notice, is the level design. It's on a whole new level, I can't remember the last game that had so memorable, unique, and new levels as this game. The game's world in itself is already charming, but it really turns it up to 11 when you travel into people's minds. All minds have a theme they revolve around (eg. gambling, regrets over not sending a letter), and they are extremely well designed. The levels play with perspective, gravity, 2d/3d switching, it's really nicely done. The graphics look crisp, and sharp, there are nicely made maps that you can consult for the various areas, but no ingame "radar style" map, which works out for the better. 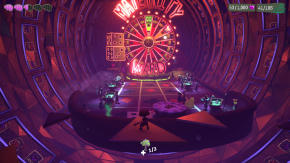 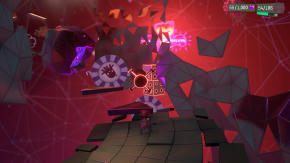 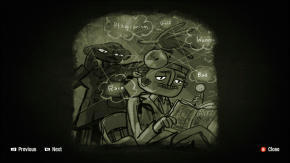 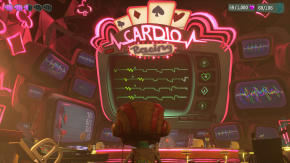 Without spoiling anything, in one of the levels, there is a major, Mario Odyssey - New donk city like finalé, that completely blew me away, and mind you, this level was only a small detour in the story, that I had to do to open a door, to progress along the main objective.

The platforming is nice, you have a slow-fall like ability from the beginning, to help manoeuvre in the air, you can conjure a ball you can roll on to go faster (rolling with your thoughts), and checkpointing is quite good, so if you fall into lava, you don't get put back too far. As a side note, the main character's family is cursed, so that they will die in water. This manifests in the game as any time you touch water, a watery arm will try to grab you, and drown you (which I found hilarous), but the game gives you some leeway there, you have to hit the water 3 times for it to actually pull you under. Overall, it makes it a pretty nice and forgiving platforming experience.

The game has a nice humor and charm to it, and the story so far is great, I believe I must be around halfway in the game. There is a main storyline, and also some sidequests, but so far there are no grindy or boring fetch quests. 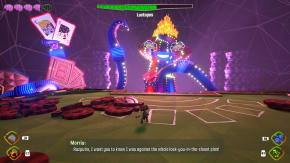 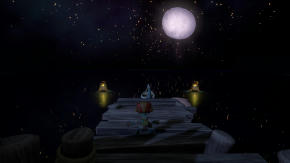 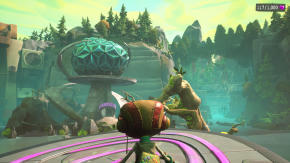 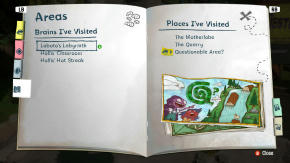 Collectibles, things to do, exploration

I like to separate collectibles in games into two groups:

This game mostly has the latter, which makes exploration feel rewarding, unlike eg. Paper Mario, where finding the toads is basically useless. It has cards which you can turn in for rank ups, max hp upgrades, one currency, "figments of imaginations" which can also provide rank ups, and some other things. If you like to 100% games, this will take a long time. There will be also some backtracking involved, since some skills only unlock later in the story, but you can revisit all the levels after a while.

And boy, there is a lot to explore. The game has a pretty big major hub, that is full of collectibles already, but the individual brains you enter are also full of stuff to collect. There is a maximum PSI Cadet rank you can achieve (101), and going up in the ranks unlocks new abilities. 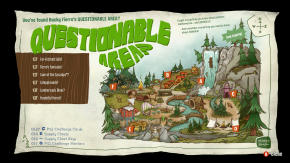 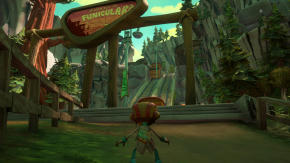 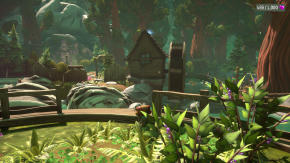 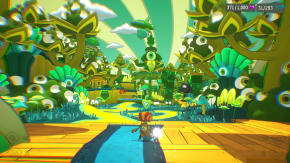 I felt the combat is okay in the game, you have your basic melee attack, dodge, doublejump, and several skills you can use and upgrade, like a psi blast ranged attack, yanking enemies' weapons with telekinesis, pulling them closer to you, and so on. Each skill has 4 upgrades, and the game gradually introduces more and more enemies leading to a nice enemy variety. Overall, I felt battles were on the easy side, there were maybe one or two times I had to retry an encounter. My only gripe with the combat is that it feels a bit "floaty", like when you target an enemy, and use a melee attack, Raz can zip through almost the whole screen to punch the enemy. The boss battles are really well done, phenomenal and fun.

Overall, I really enjoy this game, and I can't recall the last time I was this surprised by good level design. This game is tight.

The flaws in Elden ring
»