Nintendo's newest release in the Paper Mario line. Like all other Nintendo titles, this one is also exclusive to their own platforms, namely the Switch. I'm currently after the second boss in the game, which is about 5-6 hours of gametime.

Let's get the major point out of the way:

For whatever reason, Nintendo did the same thing that they did with the previous Paper Mario: Sticker star, they completely removed as many RPG elements from the game as possible. There is no experience points, and there is no character leveling progression whatsoever. You have two basic weapons, and you can find/buy more during the game, but they are non permanent, and they work on a durability system, like in Zelda: BotW. There are HP upgrades that you can pick up during the story, but that's as far as progression goes in this game.

The story is charming, the dialogues are full of great (not sarcastic) puns, and word plays, and folded up Bowser is absolutely hilarious. The color palette and the world is great, and gives a really nice experience. Exploration is a bit lacking, while there are many collectibles, most of them have no gameplay value (just a bunch of items you can look at), or the added value is so extremely small (like a bit of help in battles) that it's only worth going after them is if you are a collectionist. 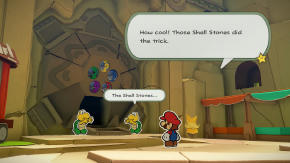 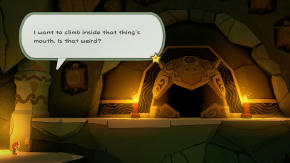 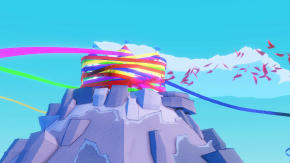 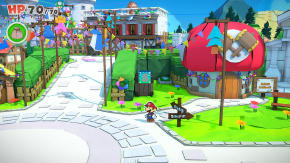 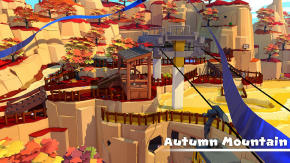 The overworld has a mechanic, where some parts of the world is "missing", like an empty hole. You can sprinkle confetti on it, covering the hole, at which point you get a bunch of coins, and allows you to pass over the terrain. You get confetti by defeating monsters, picking them up from the ground, and/or hitting various objects, like trees with your hammer. It's nice for the first hour, but after that, it becomes a chore. You already get so many coins from the battles, and you can't really spend it on anything tangible, that they quickly lose value.

There is an atrocious amount of hand holding. If you played Undertale, imagine Toriel on steroids. Even the most obvious things are explained, sometimes twice. This game could really really use a "Have you played any games in the past?" prompt in the beginning, and skip all of these. 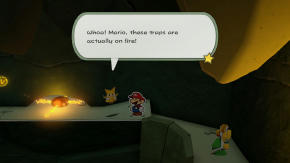 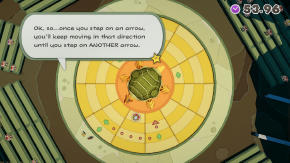 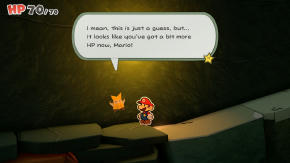 Battles consist of a battlefield that is split up into 12 slices, and 4 rings. The enemies are standing in a pre-determined setup on these fields, when the battle begins, you are given X amount of moves, that you can use to rotate the rings, or move the slices. Your objective is to line up the enemies in either a straight line behind each other, or in a 2x2 block. Doing so awards you a temporary strength up, and it allows you to hit multiple enemies at the same time. 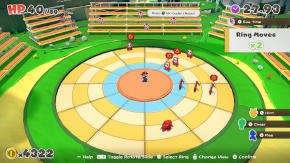 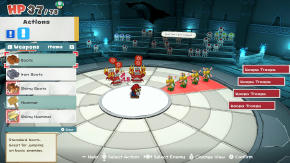 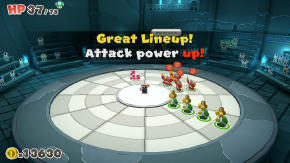 Lining up the enemies perfectly ●

I found this pretty promising, it makes the battles into small puzzles, giving a new spin on the old "my turn, your turn" formula, but unfortunately almost all battles are completely, brain dead easy. In the first 3 hours of the game I have:

There are a few more things you can do in a battle:

There is no abilities/magic/techniques. There is also small QTE when attacking for extra damage, and a QTE when you are attacked, for taking less damage. Enemies can be seen in the overworld, and you can start a battle with a surprise attack by jumping on them/hitting them with the hammer.

The boss battles are littered with health ups. It does get a bit more challenging around the first boss (3rd hour), and more tedious at the same time. Since there are no reward to the battles, no XP, no level ups, no abilities, you only get coins, I started avoiding the encounters altogether.

You can have up to 3 accessories equipped at a time, which will give various small bonuses, like some extra seconds to align the battlefield, but there is no permanent equipment that would give you stat boosts (since there are no stats either, apart from HP). There are some temporary equipment that you can use, but they break after a certain amount of uses. I find it hilarious that among all the features they could have picked, Nintendo chose to bring in the most hated one from Zelda: BotW.

The best summary I have for the game is that it's a gimmicky adventure game. It sits somewhere on the border between sloggy and interesting, the world and the design holds it up, but the battle system and lack of progression brings it down. I can't come up with any explanation about why Nintendo did not make this game into an RPG. It's not even making it an RPG, it's like they deliberately cut out as many RPG elements as they could. It was one of the biggest complaints for Sticker Star, and they did it again.

I got bored somewhere before the 3rd boss, and I don't think I will take it out again.